I have always been a big fan of open source, with my first Arduino to The Pis and Beagle bone i play with today. The impact of open source on my life has been great. This affinity to all things open source has lead me to the OHSWA 2013 conference at MIT. Where all the greatest minds in open source come together for a day of fun and knowledge sharing.

It all started with the ebadge by WyoLum, which is a e-paper display on a nice white PCB. here is my display pic that was created using the wifit program ( it had a few bugs) but works fine :-),  awsome work by the guys at WyoLum and Repaper. 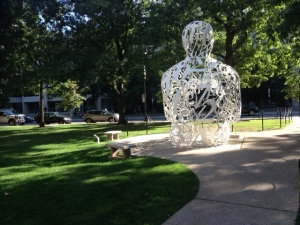 Finally found a place to park..

An Amazing keynote by Eben Moglen , on the Open Source spirit started the talks. It really touched my heart and made me a true believer in open source…
Next was the talk from the creators of dropbot, a replacement for poor grad students working on fluid pipette. This was followed by a quick presentation by Mach 30 on export control and various regimes that control export of Open Source hardware in the US.  J.Simmons told us how you could end up in prison, if  you don’t pay attention to export rules and regulations set by government.

Then came Open Source Chip design by Julius Baxter. It does have its drawbacks because chip design is very expensive and there is little room for error. It also threw some light on the CERN license. Finally 3D printing, from the makers of RepRAP. The RepRap Morgan(good for food printing), RepRap Simson are two new designs that are added to the RepRap family. The idea of having a completely open source 3D printer makes it possible, for everyone to have their own 3D printer.

The Lasersaur Project, sounds interesting, started in 2010, its a open source Laser Cutter… Awesome i want one of those 🙂 . it has an amazing cross platform tool that runs from your browser(more amazing).

That lead to the most awaited coffee break……

That was a short break…

Michael Weinberg gave his inputs on the Copyright symbol and why protecting hardware ideas using patents is bad idea. Sharing Infrastructure and Norms of Open Source Hardware is very important-moral of the story. Alice King spoke on Open Source funding and how to fund your ideas through crowdsourcing . Check out the new bountysource (gives some limelight to funders too).

Collective innovation, is messy words of wisdom by Amanda Wozniak. Project management is the key element to manage large complex and diverse groups working together on a single project. Check out Open Design Engine to manage your next open source project.

Ken burns, founder of Tiny Circuits shared his experience on launching his project through kick starter. Thats when i met rayn who  was sitting next to me, he just had his RGB led project funded through kickstarter. Mathilde Berchon gave some very interesting infographic maps of open source hardware, creators and projects, nice to know 83% of these open source hardware startup founders are engineers out which 95% are Men 🙂 and remaining 5% percent are women. I am sure Limore Fried founder of adafruit is on the top of the list, with programs like ada-initiative we can see this number increase over the year. 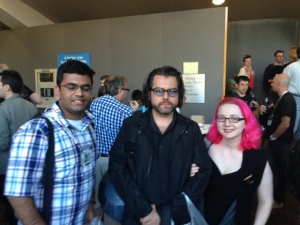 Ted Hayes told us that Internet of things has been added to the Oxford Dictionary. I was happy to hear about Weemo in his talk, i have two of those , and heard these weemo switches have some security flaws, really don’t care, coz all they can do is switch off my lights 🙂

Neo Lucida, is the most amazing thing i have see today, made me an artist in 5min. Check it out. (I really need to get my hands on one of these.)

The app testing robot from@hugs the co-founder of sausce labs. was interesting,  words of wisdom ” you need to make ONE” to sell one! check it out…

Building one kit at a time by Jeff Warren. He talked about the little bits kit which is an amazing toy for kids to learn science, check out other kits from spark fun and Digilent and the awesome spectroscope from public lab . 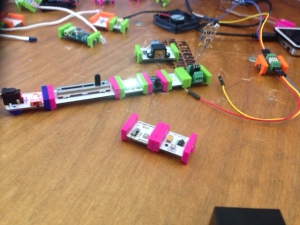 man behind the idea.. 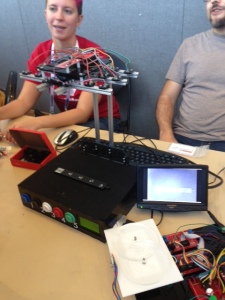 Marcin Jakubowski gave a simple, yet creative presentation on the open source Industrial Evolution, a very interesting way to look at things. Later the Traces of innovation talk , showed how novelty and popularity are interrelated based on the analysis on work submitted on thingiverse.

A talk from the inventors of parallela, an open source parallel computing platform, it uses the Adapteva  and a ZYNQ. They have convinced me to buy their new dev. board, they said it should be shipped by the end of Oct- (a 99$ super computer- 16core CPU, 2 ARM A9 and FPGA all on one board). I totally agree with  Paulo Blikstein, making kits easier to use and cheaper is the need of tomorrow. Phoeneix Perry, a very annimate person, gave the most amazing talk of the evening , on women in technology, sad that less and less women are getting into technology:-( .

Then came “Why?” by Bilal, the countries with the highest GDP has the highest no. of Open Source Contributions(interesting observation), a good thing ?..check this out (help them out) http://gemsi.org/reachout 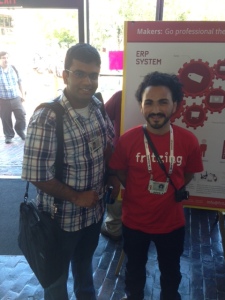 Guys from Fritzing.. they r awsome 🙂

Touch screens that have feedbach, it uses a vibrating(ultra sonic) screen

Matthew Borgatti gave an amazing talk on ” how open is ur source?”, he talked about how hardware desing methodologies are shared and how to publish knowledge. Ilan E. Moyer spoke on making machines that build, its all about the tools, the material and the idea, Gestall is his new opensource framework that can be used to build machines that can make ( go make your own 3Dprinter that can engrave 🙂 )http://pygestalt.org

Caleb From EE times, gave an emotional and powerful message on how hackers can help the disabled check out his video. and check this out http://http://www.oneswitch.org.uk/

Finally the last talk talk for the day by Katherine Scott, reassured that robots are not talking over our jobs, rather organized labour or automation helps us to increase productivity and help develop the economy.

also check out the minnowboard, finally a open source board from Intel.:-)

and another Pi board, called the Pi topping to aid students in learning Robotics using Raspberry Pi 🙂

All the talks were awesome and very different in their own way, but i am really sorry if i forgot to mention it on the blog… The organizers did a fantastic job this year…bravo!! can’t wait for the next 🙂